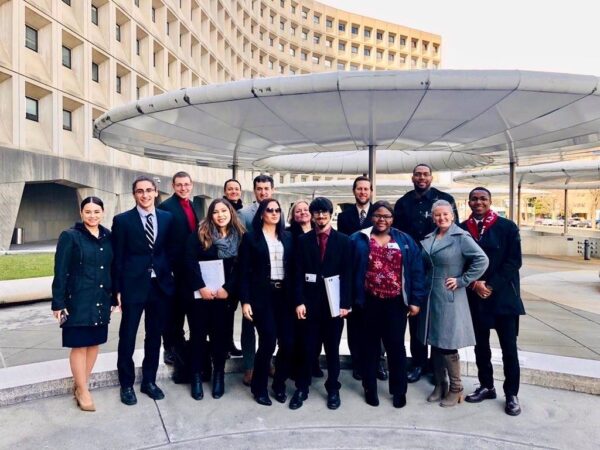 I consider myself a pretty good advocate.  I’ve increased a federal line item or two over the years.  Most notably, HUD’s Family Unification Program (FUP). In fact, when we started the National Center for Housing and Child Welfare (NCHCW) in 2008, the federal line item for FUP was zero.  Now it is $40 million annually and counting. Pretty impressive.

But it wasn’t until I took the advice of folks like NN4Y Executive Director, Darla Bardine, and sat at the advocacy table with youth that I began to realize the magnitude of what I could and should be doing.  It turns out that young people who have navigated the intersection of childhood and adulthood without the support of family have a unique and hard-won vantage point.  From this perspective, they see flaws that are invisible to many of us in the professional class and cook up solutions we didn’t know we needed a recipe for.

It All Started in Ohio

In 2013, I began working with ACTION Ohio, a group of current and former foster youth, led by alumna and formidable advocate, Lisa Dickson. They took it upon themselves to travel to DC annually to seek housing solutions for disconnected youth.  The program they complained about the most, ironically, was my beloved Family Unification Program! FUP provides a three year Section 8 subsidy to former foster youth. I mean what’s not to like? But year after year they emphasized that FUP had serious synchronization flaws.  It was only available in some communities (only 13% of housing authorities have FUP) and it wasn’t timed properly with emancipation from foster care. In true national advocate form, I mostly ignored their pleas and continued to feel pretty great about my accomplishments.

Despite my hubris, ACTION Ohio kindly let me keep my seat at the table and finally – FINALLY – after Shay again patiently shared her story of aging out into homelessness in a county that didn’t have FUP, while vouchers went unused in neighboring counties, I woke up.  She roused me from my satisfied, uncritical slumber and together, we all started to cook something up.

The real breakthrough came in 2016 when we met with Rep. Michael Turner (R-OH) and he said something that I will never forget to Marcus, Michael, Kai, Curtis, and Shay after hearing their stories, “This is government-created homelessness and it’s entirely predictable. We can fix this.”  And then he directed his staffer, Dan Hare, to work directly with us to fix it. The youth came up with a crazy recipe: FUP vouchers must be available to any young person who needs one regardless of where they live or when they age out. They also suggested that if youth voluntarily enroll in self-sufficiency services, they should be able to extend their voucher assistance for two years (for up to a total of five).  So, Rep. Turner took that and worked with Chairwoman Waters’ staff and thus, later this summer, you will see the introduction of “The Fostering Stable Housing Opportunities Act.”

Well, in addition to being good cooks, youth are impatient when it comes to systems improvements.  So, last summer we studied HUD’s regulations and we figured out that because FUP is an eligible use of an account at HUD called the Tenant Protection Account, TPVs, as those vouchers are called, can be issued “on demand” in increments as small as one.  Also, we found that the TPV account had unused carryover funds of $133 million. It turns out that the HUD Secretary has the discretion to dispense TPV funds. So, we wrote up the proposal and requested a meeting with Sec. Carson. He accepted our meeting, loved our proposal, nicknamed it the Foster Youth to Independence (FYI) Initiative, and implemented it within four months of our March 4th meeting.

One of our partners in developing this proposal was the Public Housing Authority Directors’ Association.  They had a nickname for our proposal as well: “The Elegantly Simple Solution.” And simple it is – as you can see from the chart below. Three to six months before a young person’s emancipation from care (most youth can stay in foster care until their 21st birthday, by the way) the Independent Living Coordinator simply notifies the local PHA that a young person is in need of a voucher.  The PHA notifies HUD that they need a TPV and HUD dispenses the funds. The youth leases up a voucher for three years and has access to supportive services from the child welfare organization or a suitable community-based organization.

How FYI/FSHO Works on the ground 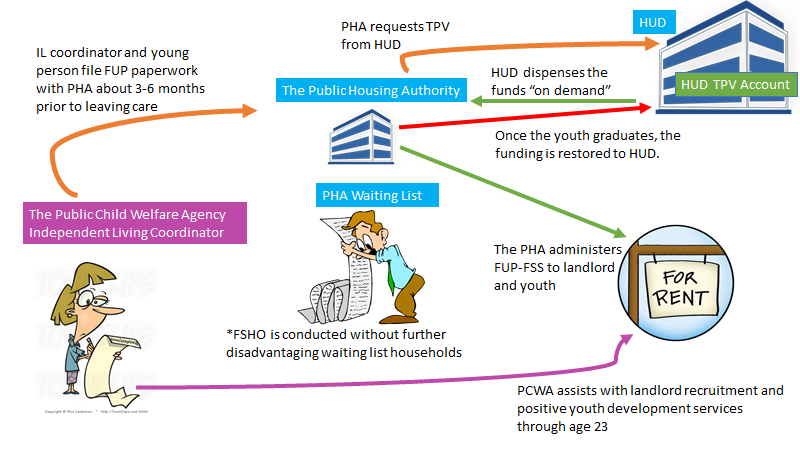 Please keep in mind that unaccompanied youth who have not reached their 25th birthday who have had any involvement with child welfare at any point after their 16th birthday are eligible for FUP and thus FYI!  ACTION Ohio is a mix of youth who have experienced foster care and homelessness and intend for all of their brothers and sisters to have access to housing as a platform for success. RHYA programs are such an important conduit to this and so many other flexible resources.

HUD’s FYI initiative is hemmed in a bit.  Currently, HUD has invited only PHAs that do not have FUP vouchers to participate.  Also, HUD did not include our self-sufficiency extension. But this does not dampen our appetite for this program at all!  We are so grateful to HUD for moving forward at record speed to implement FYI and we remain anxious for Congress to follow their lead and move FSHO forward as well.

Learn more about FYI from Ruth White at her NN4Y webinar on Wed., Aug. 14 at 2 PM EST