Daybreak, Inc., was founded in 1975 to operate a shelter for runaway and homeless children serving Dayton, Ohio, and surrounding areas. In the decades that followed, the organization took on additional challenges related to youth experiencing homelessness, including the creation of a program that subsidized apartments in the community for young adults. By 2002, Daybreak was worried clients were not showing improvement, despite stabilization of their housing situation, and began to pursue alternatives.

In 2006, the Ohio Housing Finance Agency (OHFA) awarded Daybreak Low-Income Housing Credits and gap financing from the Ohio Housing Trust Fund to finance the development of a new facility with 24 on-site apartments, the first such use of housing credits nationally. That building, Opportunity House, opened in 2008 and also includes a youth shelter, street outreach facilities, and administrative offices, breathing life into a former abandoned warehouse.

Starting in 2011, Daybreak began collecting standardized demographic information about its residents and tracking their outcomes with respect to education, income, and employment to learn more about those they serve. In total, 174 youth (mostly aged 18 to 20) entered and exited the program during the study period, which ran through late 2014.

Here are some of the key figures about Daybreak’s population:

While in Daybreak, improvements were noted in each of the three areas noted above. Though the findings are only suggestive, each of these gains was significant:

• Nearly half (48%) of clients had either increased their education level or were enrolled in higher education at exit.

• Earnings had more than doubled, increasing from a monthly average of $210 per client to $440 per client while participating in the program; and

• More than half (55%) of residents were working at least 20 hours per week at exit. 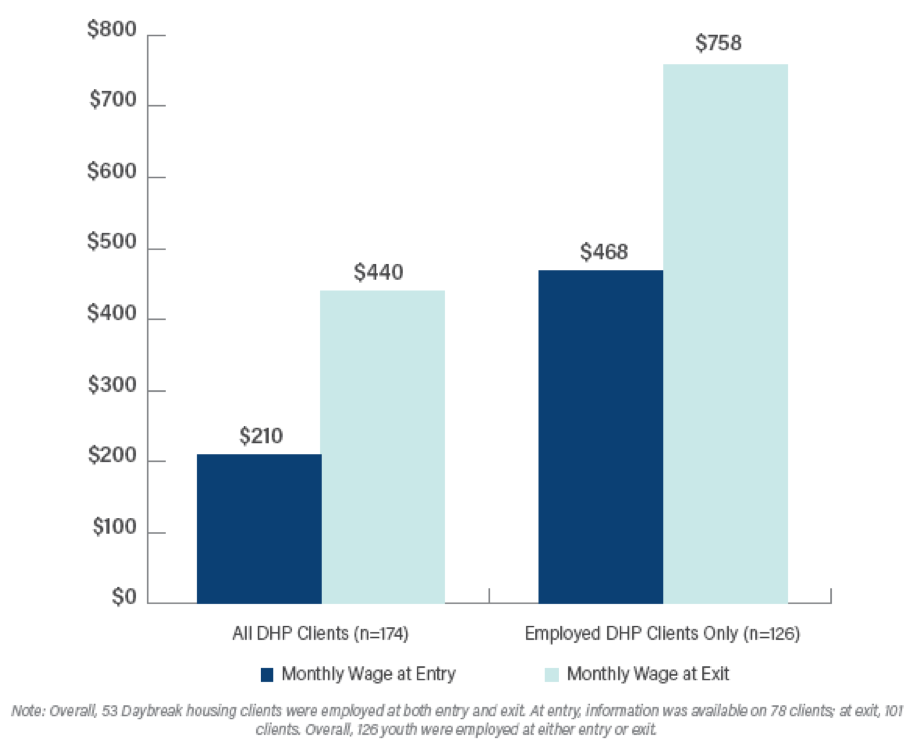 While these results are relevant in and of themselves, statistical tests were conducted to find out what kinds of youth performed best in Daybreak. The single best predictor of whether youth experienced improvement was their length of stay. Simply being in a stable, supportive environment for a longer time was associated with improvement on every outcome measured.

The full report is available here.